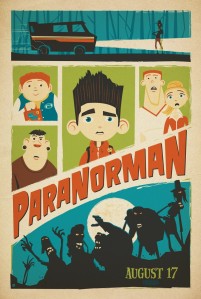 The new zombie comedy film from LAIKA House Animation (the makers of Coraline) hits theaters this weekend and there are many reasons you should go and see it. At first glance from the trailers and promotional material for it you may just think it’s a typical zombie film (albeit animated) cashing in on the current trend, but you’re dead wrong.

ParaNorman is so much more then a zombie movie and similar to the way Shaun of the Dead turned the genre on its head, so does this film. Norman is a weird kid; he’s obsessed with zombie films, has the ability to talk to the dead, and prefers being a loner. He’s pretty comfortable with who he is but it’s the fact that other people can’t accept him for who he is that bothers him.

Norman is very much the typical kid of today other than his special ability, but it is because of this fact that he’s different that he is bullied. The way the story handles bullying and the message behind the repercussions of what can happen when it goes to the extreme is one of the defining strengths of this film. One of the major reasons why I loved this film is not just because I can identify with Norman because I was a weird kid, but I believe there’s actually a lot of us that were weird kids and we went through the same things he does (minus all the supernatural stuff).

This film teaches kids that it’s ok to be different, or “weird” and that you don’t have to be scared of who you actually are because that’s what makes you unique and eventually you’ll be the one who’s more successful in life because of your uniqueness.

Not only does this film have a great moral message but it’s also a great comedy too. There are jokes in ParaNorman that work on many different levels for both kids and their parents. That in and of itself is a great thing for ParaNorman to accomplish as it moves in between light and dark subject matter.

All of the voice casting for this film is spot on, with Kodi Smit-McPhee (Let Me In) as Norman truly shining in this role. He makes you feel for Norman and root him on as he attempts to save the day and become the hero.

The animation in this film to put it simply is breathtakingly beautiful. While the shared production roster of LAIKA’s previous film Coraline is inherent, the style to this world and all of its characters is it’s own unique beast. The mixture of stop motion, 3D, and the color palette of the film truly make it pop right off the screen. 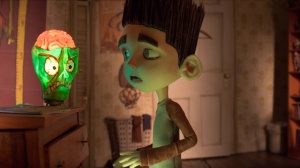 I truly cannot truly express how much I love this film. With its combined message of morality, beautiful animation, and a great story it definitely ranks as my favorite animated film of the year. Personally it’ll be very difficult for another film to come as close to perfect this year as ParaNorman has for me. So please support this film and take your family, go with friends, or even by yourself and truly experience how #WeirdWins.

Make sure to check out episode 26 of the podcast where we will cover ParaNorman extensively.