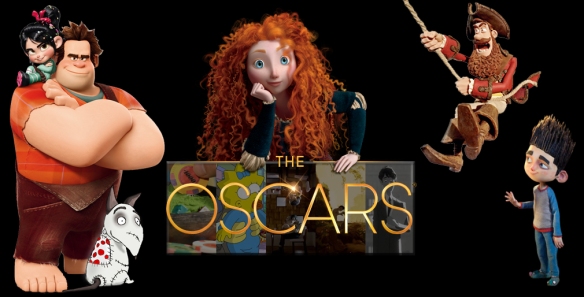 It’s that time of year again, folks! Let’s break out the bow ties and gowns in celebration of what’s commonly known as “the biggest night in Hollywood”. I’m talking, of course, about the 85th Annual Academy Awards. 2012 was filled with wonderful animated creations that have entertained and moved us all. The Academy has narrowed down their favorites in each category to five Shorts and five Full-Length Feature nominees, all vying for the highest honor, an Oscar. We here at Animation Fascination have decided to share exactly who we would like to win tonight, take a look after the jump…

The race for gold in short film to me for a long time seemed like it was an easy answer as to who would win, John Kahrs’ Paperman. After I watched Minkyu Lee’s Adam and Dog though I felt very conflicted on who I thought should win. Both shorts are magnificent works of art that I absolutely love, but ultimately I have to go with Adam and Dog on this one (but I’ll be happy if Paperman wins too).

My top five animated films of 2012 ended up being the nominees for the animated feature category of the Oscars this year, so whoever wins I’ll be happy. But my absolute favorite film of last year was ParaNorman, so I would love to see it win. Realistically though I think it will probably end up going to Pixar’s Brave (which I’m totally fine with). How awesome would it be though if The Pirates! Band of Misfits surprised everyone and took home the little golden man named Oscar?

Paperman will win the short film category. Plan and simple.

I have a feeling Wreck-It Ralph will take the feature length Oscar. ParaNorman would be my choice favorite.

As far as the shorts go, I personally would love to see Maggie Simpson in The Longest Daycare take Oscar gold. Being a realist, though, I know it’s going to go to Paperman, which would also be fine with me. I think both shorts succeed in telling a story purely through the use of animation. I just prefer the story The Simpsons is telling more.

The Animated Feature length is a bit tougher. There’s something about every single nominee that exceeds expectation. The strongest one in my opinion, though, is ParaNorman. I loved the character design, the off-kilter story, and there was an emotional resonance within the film that didn’t feel cheap. If I were a betting man, I’d say Wreck-It Ralph takes home the award, but I feel like ParaNorman is the strongest of the pack.

I saw Paperman for the first time at last summer’s “75 Years of Disney Animation” event put on by D23. I immediately fell in love with its singular style, charming story and technical excellence. I hope the Academy voters feel the same.

Director Rich Moore, producer Clark Spencer and their team at Walt Disney Animation Studios hit a home run with this inventive and beautifully animated film. While it’s going to be a close race between Ralph and his Scottish archer cousin from Pixar (Brave), this funny and fantastic homage to video games gets my vote.