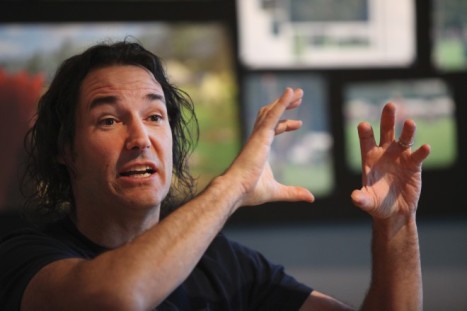 Recently Brave Director Mark Andrews travelled to Glasgow, Scotland to start a mentoring project for Scottish students. While there he spoke with the Scotsman about many things, among them an original film he’s developing at Pixar as well as the possibility of a sequel to Brave.

Andrews at The Glasgow School of Arts:

Much like many of Andrews’ feature directing colleagues, he’s been with Pixar for quite some time. In the past he’s directed and co-wrote the short One Man Band as well as serving as The Incredibles story supervisor, while also co-writing its spinoff short Jack-Jack Attack.

During production on Brave he was promoted to director when Brenda Chapman was unfortunately taken off the film. The fact the film went on to win many awards including the Oscar for Best Animated Feature will most likely help his future at the studio to helm further projects.

So it comes as no surprise then that Andrews is now hard at work writing a new original film that he will also be directing. His announcement about the new project came near the end of talk about a possible sequel to Brave in the future:

I am currently working on another film, which is original and is being written and directed by me, but that’s all I can say about that.

Andrews also shared a candid comment about the Oscars:

Going up to get the Oscar was probably one of the scariest things I have ever done. I thought Wreck-It Ralph was going to win so when they said it was Brave I thought ‘Oh no!’ It is not a very friendly audience. You have all the actors, who are all charming and beautiful people individually, but they don’t want to be at the Oscars either. They are just staring at you.

On the possibility of a Brave sequel:

If we got the right story it would be fun – to get the gang back together again, add a few more new characters and find out what other Scottish talents are out there that might want to do an animated fun.

I don’t know if there will be another one. We never make a film at Pixar to have a sequel. It is always nice when you do and we kind of have a philosophy that if we find the right story then we will. Surely the marketing and success of Brave says that you can have one and they will come. Make it and they will come.

Before getting concerned (which honestly there is no reason to) about a sequel to another Pixar film, this all just speculation at this point. So what do you think, are you excited about an original concept from Mark Andrews and/or a possible sequel to Brave?