A new trailer for the upcoming Disney Infinity game has recently been posted to the Disney Infinity YouTube channel. The trailer highlights Disney Infinity’s “Toy Box” mode, which allows players to “build and customize their own unique virtual world using their favorite characters, vehicles, settings and accessories” and “to share these unique creations…with friends both online and off.”

The “Toy Box” is just one of the features of the upcoming Disney Infinity game, which is now scheduled to be released on August 18 on all major gaming platforms. The game also includes a “Play Set” mode where “players will solve challenging puzzles, battle enemies and explore iconic locations from famous Disney properties, while collecting unique characters, vehicles, and gadgets from each world” that can be saved to the player’s virtual Toy Box. The Play Sets available in the game are determined by the collectible interactive pieces which the player has. Using a similar approach to the popular Skylanders game series, Disney Infinity requires collectible character figures which are placed on a sensor base that will then open up new worlds of play in the game. Included in the Disney Infinity starter pack are three collectible character figures and, therefore, the three worlds where these characters reside: Sulley from Monsters, Inc. and the upcoming Monsters University, Mr. Incredible from The Incredibles and Captain Jack Sparrow from Disney’s Pirates of the Caribbean live-action film series. 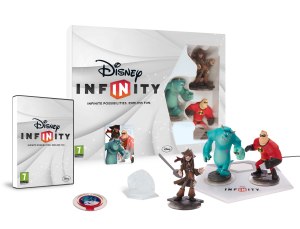 Check out this interesting interview John gave to GameTrailers.com  at the January press event. The interview includes more screen shots of the Disney Infinity game as well as insights from John Lasseter about the game’s design (and make sure to check out his awesome Wreck-It Ralph shirt).