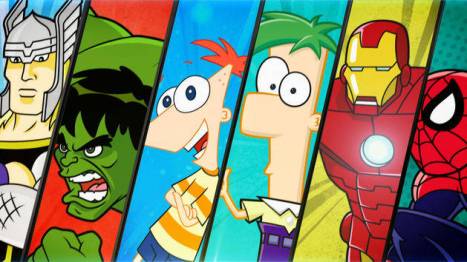 As presented at the Disney Channel upfront meetings for advertisers earlier this year, the Marvel characters (superheroes Spider-Man, Iron Man, Thor and Hulk along with super villains Red Skull, Whiplash, Venom and M.O.D.O.K.) have been designed to fit into the Phineas and Ferb world by the show’s creators and executive producers Dan Povenmire and Jeff “Swampy” Marsh. We at Animation Fascination also heard more about the upcoming special from the voice of animated Spider-Man himself, Drake Bell.

The preview shows some great gags and one-liners, just like we’d expect from a good episode of Phineas and Ferb. Are you looking forward to Phineas and Ferb: Mission Marvel this summer on Disney Channel? Let us know in the comments below.

4 thoughts on “Watch This: New Trailer for ‘Phineas and Ferb: Mission Marvel’”