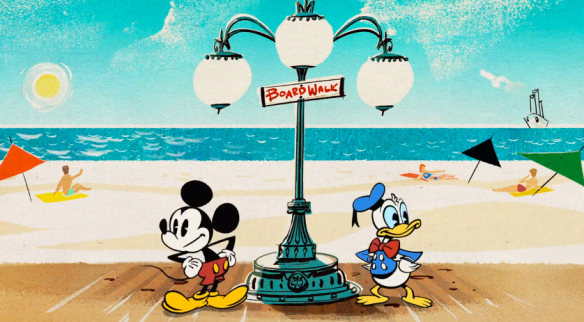 Disney is rolling out their new 2D Mickey Mouse cartoon shorts series on Disney Channel starting the weekend of June 28-30, 2013 (8:30 p.m. ET/PT). Disney gave us a sneak peek of the series last March with the short “Croissant de Triomphe”. Now available for viewing on Disney.com is a brand new short called “No Service”. New shorts will be premiering every Friday through July. The shorts will also be available to view on the WATCH Disney Channel mobile app, iTunes, and a new “Mickey Video Player” mobile app (which we haven’t been able to find yet, at least not on the Apple App Store) after their Disney Channel premieres.

According to the press materials:

“With the slapstick feel of classic Mickey Mouse and contemporary direction and pacing, the series of cartoon shorts presents Mickey in a broad range of humorous situations that showcase his pluck and rascality, along with his long-beloved charm and good heartedness. Each cartoon short finds Mickey in a different modern setting including Santa Monica, New York, Paris, Beijing, Tokyo, Venice and the Alps, facing a silly situation, a quick complication and an escalation of physical and visual gags. The stories also feature genuine heartfelt and heroic moments as Mickey explores and experiences life with his comical partners: Minnie Mouse, Donald Duck, Daisy Duck, Goofy and Pluto.”

The shorts are produced in 2D animation with a retro-design that harkens back to the both the 1930’s “rubber-hose” Mickey look as well as backgrounds and graphic elements that reflect the Disney cartoons of the 1950s and 1960s. Make sure to keep your eyes open for plenty of homages to classic Disney icons that have been placed throughout the shorts (or so we’re told).