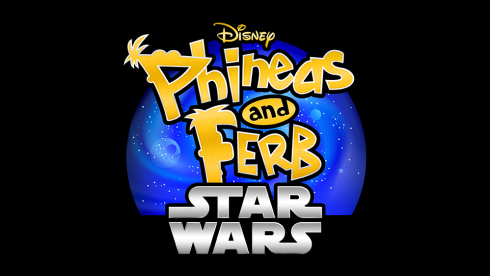 Disney’s hit animated TV comedy series Phineas and Ferb is having another cross over event with yet another major Disney property. This time, they are visiting the Star Wars galaxy. The Phineas and Ferb + Star Wars crossover TV event was announced this past week at San Diego Comic-Con by the show’s creators and executive producers Dan Povenmire and Jeff ‘Swampy’ Marsh. The TV special will be coming to Disney Channel and Disney XD in 2014.

The story will take place within the Star Wars universe. Here’s a plot synopsis:

“The event episode’s story begins a long time ago, in a galaxy far, far away – in summer. Phineas and Ferb are living happily on Tatooine, just one moisture farm over from Luke Skywalker. They love simply hanging out and creating new adventures under the twin suns but find themselves thrust into a global rebellion when the plans for blowing up the Death Star accidentally fall into their hands.

Now that fate has suddenly pulled them into the fight for freedom, they must go in search of a pilot who can take them to the rebels so they can hand over the plans. Complicating matters, Candace has a Stormtrooper-like intent on ‘busting rebels’ and chases Phineas and Ferb across the galaxy in hopes of retrieving the Death Star plans.

Meanwhile, back on the Death Star, Darth Enshmirtz, a low-level Darth, has created a Force-powered ‘Sith-inator’ that he plans to use against the Rebel Alliance. Agent P, working undercover for the Rebellion, is dispatched to stop him, but quickly gets trapped in carbonite. Then, things take a startling turn when Ferb is accidentally hit by the full blast of Dr. Darth Enschmirtz’s ‘-inator’ and becomes an evil Sith.”

This sounds like it could be a lot of fun. We’ll keep you posted as we learn more. And as Dan Povenmire said, “May the Ferb be with you…”

What do you think of the announced Phineas and Ferb + Star Wars event? Let us know in the comments below!

2 thoughts on “‘Phineas and Ferb’ Are Going to a Galaxy Far, Far Away”