At the recent Star Wars Celebration: Europe fan convention held in Essen, Germany, attendees were treated to a look into the upcoming Star Wars: Rebels TV series currently in production at Lucasfilm Animation. Dave Filoni, executive producer, unveiled the show’s new logo along with some never before seen concept art.

As previously announced, the series will take place during the 20 year time period between Star Wars Episode III: Revenge of the Sith and Star Wars Episode IV: A New Hope. The show’s design is heavily influenced by the art of Ralph McQuarrie, the artist who created the visual style and character design of much of the original Star Wars trilogy. According to Dave Filoni, “We wanted to create a look for this part of Star Wars that precedes A New Hope by just a little bit. We’re going for something that’s much more an illustrative look.” 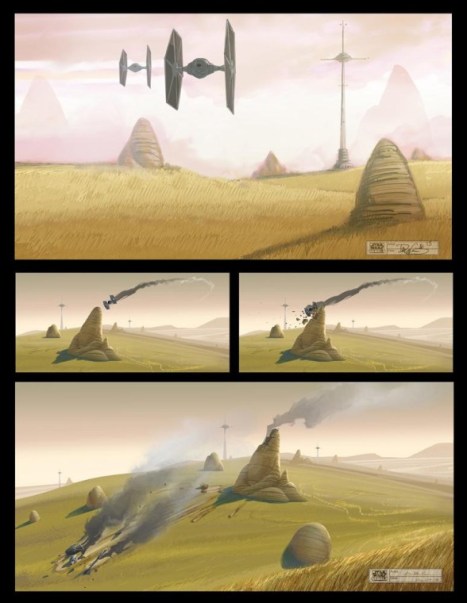 What else was shown? Well, according to Blue Sky Disney:

“Quite a lot surprisingly, from a Rebel Alliance ship known as the Ghost that will play a prominent role in the film, to battles with Tie Fighters, a Star Destroyer, interior/exterior, to a stylize[d] Storm Trooper were all seen by those attending.”

Are you stoked for the new Star Wars: Rebels series? Let us know in the comments below.