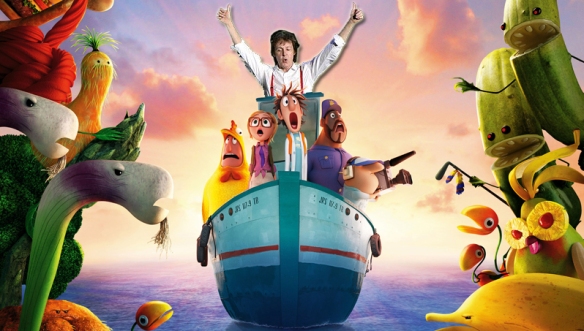 Music legend Paul McCartney’s new single, which is aptly named “New,” is going to be on the soundtrack of Sony Pictures Animation’s upcoming Cloudy with a Chance of Meatballs 2.

“We’re thrilled and honored to have Paul’s infectious and inspiring song in the film. The sequence in the film is about Flint Lockwood optimistically beginning what he thinks will be a new and exciting chapter in his life, so as soon as we heard ‘New’ we thought that everything about it was perfect.”

Paul McCartney is glad to be part of the new film, too. He said, “I loved watching the first film with my kids, so I’m very happy to have my new song included in Cloudy with a Chance of Meatballs 2.”

The single “New,” produced by Mark Ronson, is now available for download on iTunes. It’s the title track of Paul McCartney’s upcoming album “New” which will be released on October 15th.

2 thoughts on “‘Cloudy 2’ Gets ‘New’ Single from Paul McCartney”