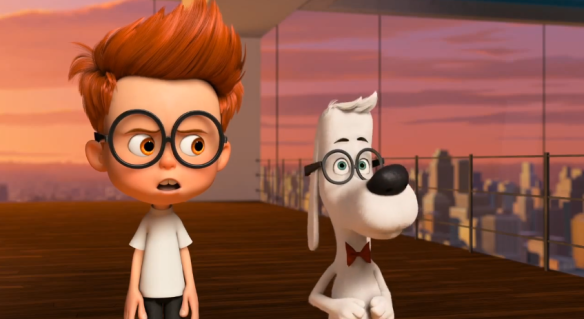 The 3D film, directed by Rob Minkoff (Disney’s The Lion King) and starring the voice talents of Ty Burrell (TV’s Modern Family) as Mr. Peabody and Max Charles (TV’s Neighbors) as his boy, Sherman, among many others, is based on the classic Jay Ward Studios segments that were part of the Adventures of Rocky & Bullwinkle TV series.

Mr. Peabody & Sherman is slated for a March 7th, 2014 release date and centers around young Sherman trying to impress a girl (voiced by Ariel Winter, also of TV’s Modern Family) using the WABAC machine–a time travel device invented by Mr. Peabody, a genius talking dog–and creating anachronisms in the space-time continuum. Mr. Peabody then has to go back and fix all of the mistakes that Sherman has made throughout time.

The film marks the first project by DreamWorks Animation after their acquisition of the extensive Classics Media Library, which included the Jay Ward Studios characters. DWA is also readying a new Bullwinkle TV show, as well as having licensed the characters to publisher, IDW, for two new comic book series. Mr. Peabody & Sherman marks the beginning of a renaissance for the beloved moose and his flying squirrel pal, and all of their friends!

As for the trailer, I’m a huge fan of anything Jay Ward did (I actually got my degree in History, partly because of the things I learned, and fell in love with, watching Mr. Peabody and Sherman as a young kid–seriously), this trailer made me laugh multiple times. I particularly enjoy how the ancient Trojans all speak with Southern California accents and lingo in the trailer. March 7th, 2014 cannot get here fast enough.