This review does include spoilers, so if you haven’t seen the film—go see it!

The anticipation for Disney’s 53rd feature-length Animated film has been over-the-top in some realms and under whelming in others. I told all my friends and family over the last few days that I was going to see Frozen (yay!) and only a small percentage knew what the heck I was yapping about. So, forbid me to question the geniuses at Disney marketing, but for whatever reason, I’m not 100% sure how many people will turn out this opening weekend. In my theater at the “midnight” (9pm) showing, there were 7 of us.  I’m sure it will succeed, though—or at least I hope it will because this was definitely a film worth going to see.

After the previews for Maleficent, Heaven is for Real and some other films, one part of this experience I was really excited for began: the Mickey Mouse short Get a Horse. The cartoon, which purposefully spoofs the black-and-white style of the earliest Mickey shorts, is endearing in that way. However, when 3D Mickey “busts through” the theater screen, so that we get to see what he and all the other characters “really” look like, I was a bit freaked out. It was cute and clever and the short will likely win some big awards this year, but it was very much like when Homer and Bart become 3D in that one Simpsons Halloween special—a bit too creepy for me. It was much easier to see Mickey reverted back to his old pre-Fantasia revamp than to believe him in 3D for me.  It was still a very good short, though.

On to the show!

This film is really, really musical. It is much more like a fantastical Broadway production (Idina Menzel from Wicked is in this, you know?) than the more pop Disney style in some of their films.  The film begins with a song that was reminiscent of the opening score for The Little Mermaid or even Les Misérables. There is the ominous warning here to “beware the frozen heart” and then we go on to meet the Nordic princesses of Arendelle, Anna and Elsa. We quickly find out that Elsa is magical and Anna knows it as young Anna shouts “Do the magic!” to her sister. We get to see Olaf for a moment here, too.

The song, “Do You Wanna Build a Snowman” is catchy and cute and used to tie together the growing-up montage that follows Princess Anna almost dying from a spell gone awry, then having her memory modified by some trolls so that she doesn’t have a clue Elsa has powers. You feel for Elsa right off the bat and that empathy carries throughout the film, so that Elsa never reads as a villain. As the girls grow up, Elsa has resigned to stay away from Anna for fear that she will hurt her again. Of course, their parents die during the growing-up part of this film (Disney!) and the young princesses are all alone in their big castle.

I found Kristen Bell (Anna’s voice, TV’s Veronica Mars and Forgetting Sarah Marshall) to be perfectly cast, with just the right amount of innocence and power behind her many musical numbers. It’s not that the trapped-teen-motif hasn’t been done to death by Disney, but the film has enough novelty thanks to directors Chris Buck and Jennifer Lee to keep it fresh. Elsa’s room in the castle was one of my favorite set designs—it is so angst-ful and gorgeous.  The song “For the First Time in Forever” is very modern-Broadway, with some laugh-out-loud lines coming from the nerdy Anna and some equally wrenching ones coming from the scared future-queen, Elsa. Robert Lopez and Kristen Anderson-Lopez, (Book of Mormon and Avenue Q) the husband and wife team that composed the music for this film, really gave us a breathtaking musical ride here. It reminds me of how song after song in The Lion King or Beauty and the Beast would just hit you as powerful, important works of art within themselves. There are five songs in the first act of Frozen.

As Elsa’s coronation takes place, Anna meets Hans with whom she shares a very quick (10 minute) courtship before getting engaged. Elsa forbids it and loses a glove in a struggle with Anna. For all you X-Men fans out there, you know what bad news it is when Rogue doesn’t have her gloves—Elsa reveals to the whole kingdom that she can make snow and ice and she runs away from the mob. Anna takes the revelation in stride and tells Hans to watch the kingdom while she chases after her sister. Elsa is devastated, but during the song “Let it Go,” she decides to embrace her newfound freedom and build herself an ice castle—no longer hiding her powers. This has caused a horrible winter to hit Arendelle, intensifying Anna’s need to find her sister and also ruining the ice-selling business of our other hero, Kristoff.

When Anna meets Kristoff, the first-time viewer of this film is wondering what strange Disney love triangle is developing and how we should feel about it. I thought, “oh, this must be Elsa’s future man” since he loves ice so much. We meet Olaf along the journey to find Elsa and he turned out to be my favorite character in the film. He reminds Anna that Elsa is still the same sister she’s always been and pushes Anna on even more. Sven is cute, too, with one of the best developments of Kristoff’s character in his “doing” Sven’s voice to show his own inner struggles.

Elsa’s snow castle is really cool (get it?) and her new look is totally uninhibited, but you never really believe she is feeling the whole snow queen thing.  Elsa kicks Anna and Kristoff out of the castle and Anna gets hit with another spell. We find out that Kristoff’s only family has been the rocks/trolls from the beginning of the film, but this time, they can’t help Anna because she got hit in the chest. Only “an act of true love can thaw a frozen heart” so Kristoff rushes Anna home to find Hans. There is intentional divided love interest now, and I didn’t know who to root for. Hans beats the giant snow monster—Score 1 Hans. Hans saves Elsa—Score 2 Hans. Hans tells Anna he never loved her and he is taking over their kingdom—oh, yeah, I should’ve been rooting more for Kristoff. 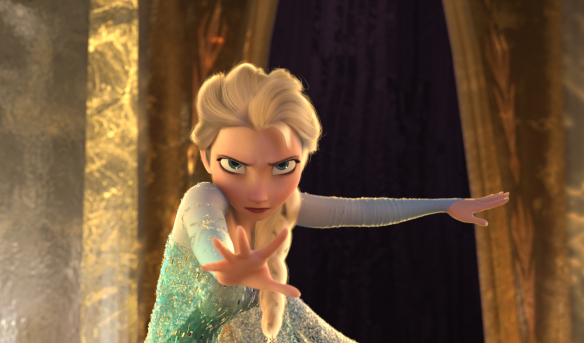 The ending for the film is cheesy at times, but still endearing and memorable. Little Olaf’s dream of seeing the summer is charmingly quirky and Anna and Kristoff’s relationship is realistically awkward, though their rushed romance may read as a bit forced at times. My biggest qualms with this film upon first viewing were a lack of character development for Elsa and an annoyance with the same character design for humans in Disney animated films, especially in the princesses. Soon, I think Disney heroines with just be giant eyes floating around. Their teeth look exceptionally small because of the oversized eyes, as well.  Overall, this film was great—definitely lived up to the Disney legacy for fairy tales and I’m sure it will provide an endless well of merchandise success for Disney to draw from.  It was exciting to see a film Walt Disney wanted to make (a rendition of Hans Christian Anderson’s  The Snow Queen) come to life in such a modern, musically awesome film.