Author’s Note: We at Animation Fascination are fascinated with all things Big Hero 6, Walt Disney Animation Studios‘ 54th animated motion picture currently in production. We will be regularly publishing articles about the project and about the filmmakers. Today’s article discusses the origins of the project and Marvel’s involvement.

When The Walt Disney Company acquired Marvel in 2009, speculation ran rampant about what Marvel property would be the first to receive the full Disney animated treatment. It took almost four years for an announcement to come and it turned out to be a bit of a doozy. The first collaboration between Walt Disney Animation Studios and Marvel is an obscure comic title from the Marvel archives called Big Hero 6. Now, the film has been introduced to the public, is currently in production, and has an official release date—November 7, 2014.

So, where did the idea for a Big Hero 6 film adaptation come from? Last May when news officially broke about the project, Joe Quesada, Marvel’s Chief Creative Officer, had this to say about it:

“The idea actually came from Don Hall, the director, who is a huge Marvel fan and obviously a big nerd if he remembers ‘Big Hero 6′. Don came to us with suggestions for maybe six of our lesser known properties, and we started working with him on some ideas for how these could be approached as Disney animated movies.

Don took three of those possibilities to John Lasseter, and John really gravitated to the story that we spitballed on ‘Big Hero 6′. That’s how it came to be, and it’s been really fun. I’ve been involved some with those guys, and it’s great to see how someone else’s creative process works. I was lucky enough to spend two days last week with John and the animation guys beating out the story and seeing how these guys work, and it was not unlike the process we have here at Marvel.”

Given Don Hall’s knowledge and expertise with the Marvel catalog along with his love for and experience with Disney animated features (Don was most recently the co-director of 2011’s Winnie the Pooh), he was the perfect fit to create a film that honors the aesthetics and story telling traditions of both Disney and Marvel. Joe Quesada continues:

“Well, I think the x-factor was that when we started re-imagining ‘Big Hero 6′ with Don and his crew, there was a story there of two brothers. I think it was a boy and his robot kind of thing that makes it very Disney in the traditional sense. But the beauty of this is that Don is a real Marvel fan, and he’s embraced the visual history of Marvel. I think we’ve gone and lectured to the animators over there about what Marvel is and how we look at visual dynamics in our comics — everything from Jack Kirby to John Romita Sr. to John Romita Jr. So there’s a lot of Marvel influence in this, which is really cool. It’s going to be an amazing blend of what Disney does in animation and what Marvel does in the action adventure genre.”

And how is the film coming along? In October, Joe had this to say about it:

“‘Big Hero 6′ is really looking great. Don Hall, Kristina Reed [the producer] and the entire crew are such amazingly talented people and have such a love for all things Marvel that it’s been an absolute blast working with them. They’ve really taken the ‘BH6′ property, which at the end of the day doesn’t have a lot of publishing history behind it, and built an entire world and mythology around it.” 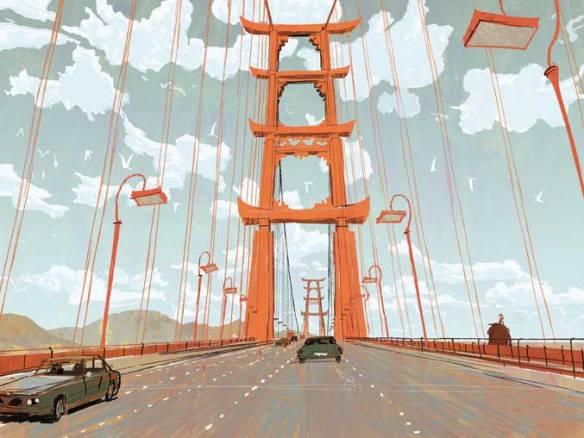 “Being there from the very beginning, the process has been amazing to watch. The amount of research Don and his crew have done is exhaustive and beyond thorough, and I don’t just mean with respect to reading the comics. From the design of the characters and their tech to the look of the world, no stone has been left unturned and a lot of frequent flyer miles have been tallied up to get where they are at this juncture. These guys have traveled the globe to make ‘BH6′ the very best it can be. It’s a tribute to how John Lasseter runs the animation division. He encourages this kind of thorough research, and you’ll undoubtedly see the results in the story and on the screen…”

Stay tuned to Animation Fascination for the latest in Big Hero 6 news and information. And mark your calendars—Big Hero 6 comes to U.S. theaters in 3D on November 7, 2014.

2 thoughts on “‘Big Hero 6’: Disney and Marvel Working Together”