“We’ll have a Dalmatian Plantation! What an inspiration!”

Walt Disney’s seventeenth feature-length animated film 101 Dalmatians came out January 25, 1961 and was a resounding success for the company.  Sleeping Beauty had been a failure and had cost the company tons, so there was actually talk of shutting down the animation department. Walt was averse to the idea, but something had to be done to cut costs. 101 Dalmatians would be made for $2 million less than its predecessor thanks to a new Xeroxing technique that eliminated the ink department and it would be the highest grossing film of 1961 in the United States.

The Xerox technique basically allowed the animators to directly copy their drawings, yielding a cleaned up final piece without artists having to hand trace them. The look of the film is significantly less clean than the previous films, but growing up I always took this for a stylistic choice as opposed to a cheap-out. I still appreciate the sketchiness of the characters in this movie as well as Robin Hood, The Sword in the Stone, The Jungle Book and The Aristocats, which also utilized the time and money-saving method. Sadly, Walt didn’t love the look of these films as he did his earlier masterpieces, but there is an ineffable charm to them all. 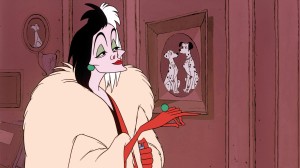 Some cool facts about 101 Dalmatians include that the film was adapted from Dodie Smith’s novel of the same name and that when Walt first read the book, he immediately bought the film rights to it—which Smith apparently had always hoped for (a little bit different from Saving Mr. Banks). The film was the first time a single story person, Bill Peet, was responsible for an entire film, but Walt found Peet’s work to be excellent. Peet actually sent Smith, who lived in Europe, copies of the story art to get her opinions, and she always said that they were doing better things with her book than she’d done. She especially loved Peet’s illustrations (as do I, he wrote and illustrated many of my favorite children’s books).

The dogs in the film have very specific spot patterns, and the spots apparently total over 6 million throughout the film. Each dog is said to have a hidden mickey in their spots. Unlike previous Disney features where the lead animators would be assigned one main character to work on, this film was more of a team effort. Seven of the “nine-old-men” worked on Perdita, although Marc Davis singlehandedly worked Cruella DeVil. This was also Davis’ last film at Disney. If you check out IMDb, there are lots of continuity goofs in this film, too.  There are only three songs in the movie—and only one of note, Cruella DeVil. The other two are the TV jingle and the little Dalmatian Plantation song Roger sings.

This movie has a lot going for it, including originality, engaging plot and good character development (I didn’t say great!). I also love the theme of opening up your heart (and home) to all those who need you. Roger, Anita, Pongo and Perdita are all so welcoming of their surprise large family. It’s refreshing in this age of 1.5 children per family. This film is also funny (“I’m hungry mother, I really am.”) and scary (She wants to make a coat out of them for crying out loud!) with just the right amount of romance. If you haven’t seen this one in a while, get on it! It’ll be a sensation!

4 thoughts on “A Fascinating Day In Animation History: Walt Disney’s ‘One Hundred and One Dalmatians’ (1961)”