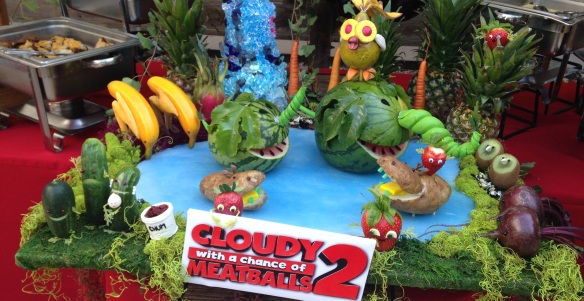 We were lucky enough to be invited by the good people at Sony Pictures Animation to their press event for the release of Cloudy With a Chance of Meatballs 2 on DVD/Blu-ray/3D Blu-ray (out on January 28th) this past Wednesday and the event was inventive, informative and quite tasty! It was my first time visiting an animation studio and I was impressed with the quaintness, yet professionalism of the staff. We got to venture around before events began and the quirky touches all around, such as life-size wooden character cutouts, concept artwork and spoof movie posters added to the whimsy of being there.

Once everyone had arrived, we were ushered into their screening room for some introductions by director Cody Cameron, director of the shorts on the DVD David Feiss and creators of the awesome end credits Kevin Noel and Seamus Walsh. Each showed us some of the bonus features available of the DVD, such as deleted scenes (some really funny ones, too), 2D shorts (meh) and making-of for the stop motion end credits (very cool).  Don’t get me wrong, I’m sure the young’uns will eat up the shorts, but they were flat to me (and not because they are Flash). 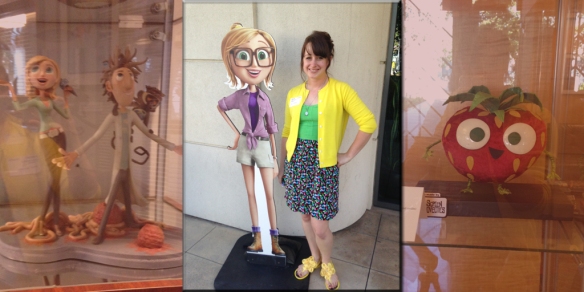 Next, children were shown over to a picnic table where Cody Cameron and head-of-story Brandon Jeffords made some foodimals out of real food with the kids. Cameron told a cool story of how he had first used real pickles to pitch the look of the characters in the film. It was very cute, especially when one mom asked Jeffords, “you aren’t giving them knives, are you?” of the kids who were to create their own out of lemons, pickles, bananas and such. Then the grownups were shown the way (but I want to make a fruit cockatiel!) down to another building where we would do individual round tables with Cameron, Feiss and Noel & Walsh (look for these on episode 59 of the podcast).

Some memorable takeaways from the round tables included Cameron saying he has nothing planned for at least six months as he is taking time off and how funny it was that the puns (and puns and puns and more puns) didn’t make sense to the French audience at the premiere in Paris he attended.  I asked him about his opinion of the future of hand-drawn animation and he said, basically, he thinks it’s not going to happen for a feature-length film again. He told us he personally loves the art form and that his dad was an animator at Disney for 35 years, but that he doesn’t believe audiences want to see that anymore. I held my tongue, but I totally disagree. 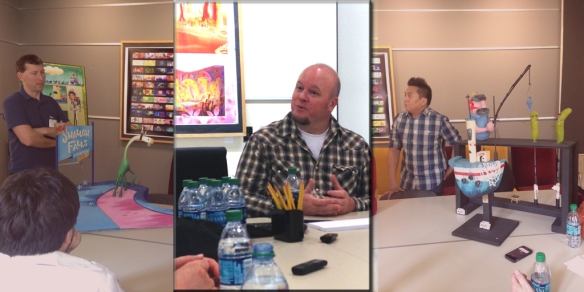 Feiss told us a bit about his process of development and how he has transitioned to solely using a tablet and Photoshop for his story boarding and sketching. He was asked about shipping work overseas and he said he believes animation should always be done in-house. He was a bit more close-mouthed than Cameron, but I asked him what his favorite animated feature of all time was and he was taken aback, but finally answered The Incredibles. Noel and Walsh primarily discussed the creation of the puppets, which were displayed on the table in the room we were in.

Last but not least was a delectable buffet of Cloudy inspired fare, including Angus sliders, grilled cheese, potato skins with caramelized onions, strawberries with cream cheese, s’mores, milkshake bar and spaghetti & meatball pizza (amazing!). During lunch, some of the characters in costume walked around and took pics with the kids and the studio had a green screen set up for us to do photos as though we were being chased by a Tacodile Supreme. Of course, the goody bag on the way out was the cherry on top—crammed with everything from the film on Blu-ray, stuffed animal of Barry, art of book, lunchbox and much more.

As far as the film goes, Cloudy 2 furthers the wackiness that was so enjoyable in the first movie. The characters are equally quirky and have some really great lines throughout. As for the food puns, Cody Cameron commented to us in the round table, you either love them or hate them. I love them and the foodimals generally. Is the plot/character development super deep? Negative. However, there are positive themes about friendship, misplaced idolatry and the seriousness of creating life. The film is also beautiful and I am really starting to be a fan of Sony’s particularly stylized character designs.

The 3D Blu-ray, Blu-ray, and DVD come out on the 28th and the digital copy is already available. Whichever way you prefer to watch it, I say give it a taste!

Editor’s Note: Check out our Facebook page for all the pictures from the press event. Be sure to “LIKE” us while you’re there.