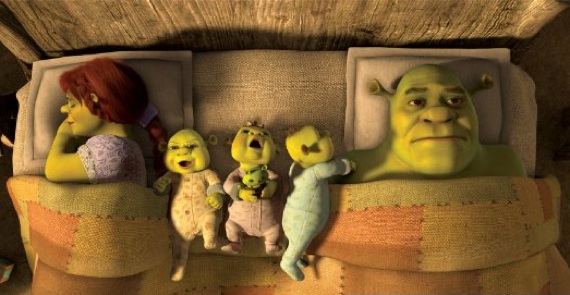 “We like to let them have a little bit of time to rest. You can be confident that we’ll have another chapter in the Shrek series. We’re not finished, and more importantly, neither is he.”

DreamWorks also announced this week a new Shrek themed interactive experience called “Shrek’s Far Far Away Adventure” to be built in London, England. DreamWorks is building the attraction in partnership with Merlin Entertainments. Scheduled the open in 2015, the attraction is the first of six Shrek themed interactive experiences to be built around the world (other locations TBA).

The London version of “Shrek’s Far Far Away Adventure” will be enclosed in a 20,000 sq. ft. building located at County Hall on the south bank of the River Thames, nearby the other London attractions managed by Merlin Entertainments (London Eye, London Sea Life Aquarium, and London Dungeon). The new attraction will have an interactive walk-through “adventure” starring characters from the Shrek films. It will also include a character courtyard where you can meet your favorite characters from other DreamWorks Animation films, including Madagascar, How to Train Your Dragon, and Kung Fu Panda.