After months of silence since last August’s D23 Expo, Walt Disney Animation Studios has started its official marketing campaign for its 54th animated motion picture Big Hero 6. With this week’s article in USA Today including new information and stills from the film and a new teaser set to debut on May 22nd, Disney fans were also treated to a new and very cool teaser poster. High in Japanese style (and also showing that Baymax’s armor has awesome jet packs in its shoes), it’s great to see the campaign launched. 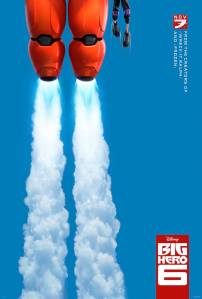