The first trailer for producer Guillermo Del Toro and writer/director Jorge Gutierrez‘s new animated film The Book of Life is now available online. First reaction: this movie looks beautiful. Check it out after the jump…

The beginning of the trailer focuses on two spirits (played by Ron Perlman and Ana de la Reguera) as they make a wager about a love triangle between three characters Maria (played by Zoë Saldana), Joaquin (played by Channing Tatum), and Manolo (played by Diego Luna). As Joaquin starts to win over the heart of Maria he is bitten by a snake and sent to the afterlife which is one giant Day of the Dead celebration everyday. There he enlists the help of Skeleton Carmen (De La Reguera) to come back to the real world and be with Maria.

When I say everything in this feature looks beautiful, I mean it. While I normally don’t go for animated films like this because I think they can get very dark, I think I will give this one a shot not just because of the cast and the premise of the film but because of how bright and beautiful it is. I can’t wait to see this in October and I think it might end up being one of the most visually stunning films I have ever seen in my life. 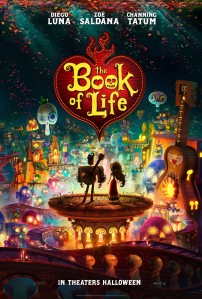 1 thought on “Watch This: Behold the Beauty of Reel FX’s ‘The Book of Life’ Trailer”