We’re all having withdrawals this summer without a new movie from Pixar Animation Studios to enjoy. Our friends at Pixar must be feeling our pain, because they’ve been releasing some information about things to look forward to in 2015. This week, Pixar announced the new short that will be shown in front of Inside Out next summer entitled Lava.

As you can see from the new poster from Pixar, Lava has an exotic, natural setting. Here’s the official synopsis:

“Inspired by the isolated beauty of tropical islands and the explosive allure of ocean volcanoes, ‘Lava’ is a musical love story that takes place over millions of years.”

Lava is directed by James Ford Murphy and produced by Andrea Warren.

At the special Pixar press event held at the Directors Guild of America in Los Angeles this week, James Ford Murphy was on hand to introduce and to screen the short (Pete Docter was also there to discuss Inside Out). Here are a couple of tweets from people who attended the event. 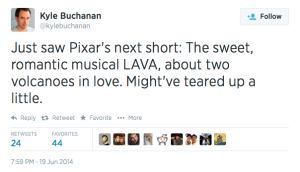 We’ll keep you posted as we learn more. Lava plays in front of Pixar Animation Studios’ next animated feature film Inside Out which opens in U.S. theaters on June 19th, 2015.