Stop Motion Magazine got to do something very cool and finally were able to publish the tale. They went on a behind-the-scenes set tour at LAIKA in Portland, Oregon to watch the filmmakers work on their upcoming feature The BoxTrolls.

The writer, along with other invited members of the media, toured various parts of the studios in January 2014, including the puppet department, the facial animation department, and the set and prop department, with a final stop in the actual sound stages where it all comes together. They were then treated to a screening of 15 minutes of the film in “glorious Stereoscopic 3D.” 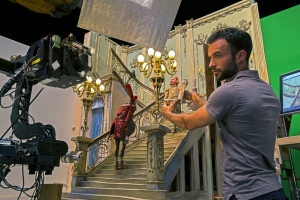 Needless to say, the writer was beyond excited. He said:

This movie is by far one of the greatest achievements in animation in over 100 years. If the Oscars truly understood what it takes to make a film like this LAIKA studios would be guaranteed a Technical Achievement Award for the amount of engineering and production craftsmanship that was required to make this film. Hands down the best thing I’ve seen in a very very long time.

Make sure to check out the article for all of the details.

We can’t wait! The BoxTrolls opens in U.S. theaters in 3D on September 26th.