The sophomore season of Warner Bros.’ animated series Batman: The Brave and the Bold has arrived on Blu-ray Disc. All 26 episodes are included on the two disc set and are presented in HD widescreen in the correct aspect ratio as the creative team intended.

Also, all episodes are presented in the producer’s preferred order for the first time, including the “The Mask of Matches Malone!” episode, also in the correct aspect ratio. 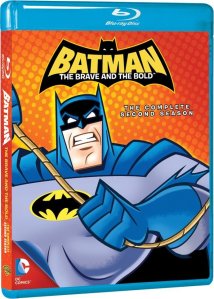 From the press release:

Across the 26-episode second season – presented in HD and widescreen as it was meant to be seen – you’ll find a vacationing Aquaman, a requiem for a Scarlet Speedster, the legendary Justice Society, the celebrated Justice League International, the Super Batman of Planet X (voiced by Kevin Conroy), Batman’s Strangest Cases featuring a team-up with one snack-loving, mystery solving mutt, and an overarching story arc that climaxes in a stunning battle against Starro the Conqueror!

1 thought on “‘Batman: The Brave and the Bold’ Season Two Now on Blu-ray”