Big Hero 6, Walt Disney Animation Studios’ 54th animated motion picture, is an action-packed mashup of animated sci-fi movie going goodness. Combining a comic book/manga sensibility with some of the best action sequences ever in an animated movie along with tremendous authenticity and heart-felt emotion, the film delivers on all fronts.

As we all know, Big Hero 6 is loosely based on an obscure Marvel comics title of the same name. Probably the only things in common that the film has with its comic origins are its title and the names of the six main characters that make up the team: Hiro (voiced by Ryan Potter), Baymax (voiced by Scott Adsit), Honey Lemon (voiced by Genesis Rodriguez), Go Go Tomago (voiced by Jamie Chung), Wasabi (voiced by Damon Wayans Jr.), and Fred (voiced by T.J. Miller). Rounding out the rest of the cast are three characters not in the comics, specifically Professor Robert Callaghan (voiced by James Cromwell), tech guru Alistair Krei (voiced by Disney Animation regular Alan Tudyk), and Hiro and Tadashi’s Aunt Cass (voiced by Maya Rudolph).

In the film version of the story, Hiro is a 14-year-old boy genius who, although he graduated from high school early, is squandering his time and his talents. His big brother Tadashi (voiced by Daniel Henney) tries to encourage Hiro to focus his great abilities elsewhere, in particular by getting him to think about enrolling at the prestigious technology school where Tadashi is also a student. Tadashi gets Hiro to come check out the school and finally things begin to click. 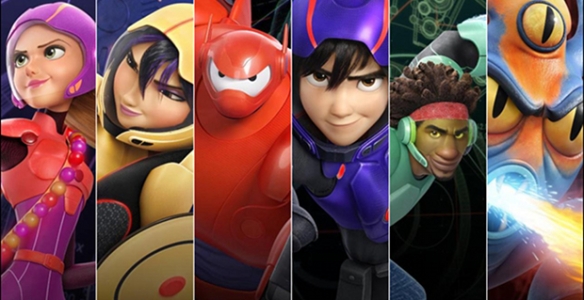 After a traumatic event rocks their world, Hiro, Baymax, and friends begin to unravel a diabolical plot set in motion by a mysterious bad guy wearing a kabuki mask named Yokai. Not only is Yokai’s identity unknown, he has mind control over a sea of “microbots,” miniature robots which work together to bring his evil plans to life. Hiro works to reprogram Baymax (not to mention fitting him with some really cool high-tech armor) and to develop scientific solutions with Tadashi’s friends to take Yokai down.

While the story is a big, wonderful mash-up of multiple genres (sci-fi, action, superhero, comedy, and drama, not to mention the classic Disney animated feature), the film’s setting is the ultimate mash-up and a character unto itself—Disney’s glorious combined creation of the cities of San Francisco and Tokyo named San Fransokyo. The setting is absolutely tremendous—instantly recognizable yet totally fresh and new; a complete delight to look at, explore, and enjoy in every frame of the film.

The animation overall is also superb. Every aspect of the production is just plain beautiful to look at from start to finish. Rendered on Disney Animation’s new Hyperion software (named after Disney’s former studio on Hyperion Avenue in Los Angeles where Walt and Roy Disney and team worked from 1929 to 1939), you’ll feel like you’re comfortably watching a Disney animated film yet also feel like it’s something completely fresh, clear, invigorating, and new. Kudos to all involved in the making of this picture because it’s breathtakingly gorgeous.

The team at the revived Walt Disney Animation Studios has proven itself again that it can make movies with the best of them. Co-directors Don Hall and Chris Williams have given us all a wonderful gift of a tremendously entertaining, well-made film. The clever story works remarkably well. The relationship between Hiro and Baymax hits all of the right notes. And the feat of bringing Marvel characters into a Disney animated feature film is expertly done (make sure to stay through the end credits!). Big Hero 6 is truly a marvel in and of itself and a worthy addition to revered canon of Disney animated features.