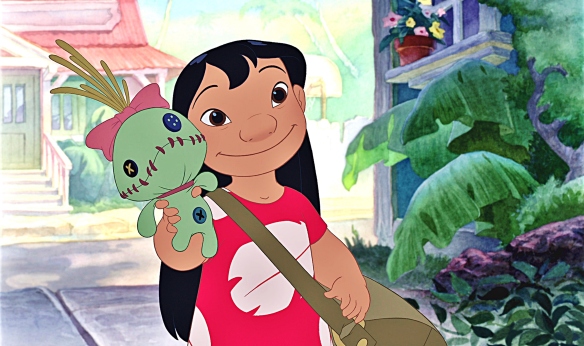 So far (and for most of the rest of the list) males have dominated as most fascinating original characters in animation. One reason for this seems to be that most female protagonists who are interesting have been derived from literature, so I nixed them in accordance with my rules for this series. A few examples of girls I absolutely love from Disney would be Alice, Rapunzel, Tiana and Ariel. However, today’s character wasn’t imagined by Hans Christensen Anderson, Lewis Carroll or a Grimm brother, but by a man with one of the most imaginative artistic styles in all of animation history.

Chris Sanders first thought of Stitch, the alien who crash lands on Hawaii in Disney’s Lilo and Stitch, in 1985 when he worked at Marvel publishing. He developed it for a children’s book, but he knew that articulating Stich’s character would take much more than twenty-five pages. When Disney directors approached him seventeen years later for ideas to pitch for films, he remembered that weird little alien and the rest is mo’olelo (history.) Sanders had a hand in every aspect of the film, from writing and directing to producing and even voicing Experiment 626 himself. And, yes, Stitch is incredibly fascinating and cute and you can’t stop looking at his little face and his extra arms and blue fur, but this article is about Lilo. I don’t think Sanders or anyone else in early development thought Stitch would have competition for interesting protagonists, but Lilo is so strangely adorable and perfectly poised to handle “the little angel” that is Stitch. 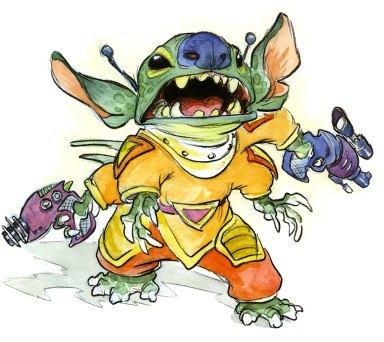 We first see Lilo running late for her hula class and it isn’t long before we realize we aren’t watching any character we’ve ever encountered before. She informs her teacher that she was late and soaked the stage, making the other little dancers slip and fall, because she had to feed Pudge the fish a peanut butter sandwich (“If I give Pudge tuna, I’d be an abomination! I’m late because I had to go to the store and get peanut butter ’cause all we have is… is… stinkin’ tuna!”) because he controls the weather. Because of her obvious sincerity, we know Lilo isn’t trying in any way to be “weird,” but unfortunately all of her “friends” have trouble seeing past her bizarre homemade doll “Scrump,” along with all the other eccentricities Lilo beautifully possesses.

Of course, since it’s a Disney film, Lilo and Nani (Lilo’s hard-working, kind older sister) have been orphaned by the tragic deaths of their parents. This really helps contextualize Lilo’s severe, depressed attitude throughout the film. When Nani gets home and finds Lilo barricaded inside the house listening to Elvis’ “Heartbreak Hotel,” we get to see the sisters’ dynamic and realize that Nani may get frustrated with her sister’s antics, but that they truly love and understand each other. Nani’s response to Lilo’s sad “People treat me different,” is “They just don’t know what to say.” This shows such a deep respect from Nani to Lilo and is profound dialogue for animation.

In fact, Lilo’s character may now be a bit of a caricature of herself in the series and sequels that followed the film, but her role in Lilo and Stitch was anything but predictable. She was an anti-Disney heroine in so many ways. She is a little chubby, she wears a muumuu, she is sweet like princesses, but in a very non-conventional way. She photographs very large people at the beach and idolizes them with a shrine on her wall. When she prays for an angel to come down to befriend her and Stitch, the vicious, snarling creature from another planet shows up as a “puppy” and picks his nose with his tongue, no other female character in animation could have reacted better: “Yep. He’s the one. I can tell.”

Lilo is an individual and I am proud that she was made by Disney, one of my favorite animation companies. I am so glad she exists as a heroine for kids to see and even though she is often overshadowed by her cute and fluffy “dog,” Stitch, Lilo deserves recognition for the standout, fascinating character that she is.

“Ohana means family. Family means no one gets left behind or forgotten.”