I think it’s still considered ranting if I mainly rave about a topic, which is pretty much what I’m going to do about the new parade, “Paint the Night,” and new fireworks show, “Disneyland Forever,” which both recently debuted at Disneyland. These shows were rolled out, along with a new version of “World of Color,” to celebrate the 60th anniversary of the park’s opening. I got to view these two at a cast screening last week and I was impressively surprised.

So, “Paint the Night” is a parade that originated in Hong Kong and has been immensely popular there. It reminds me of the “Main Street Electrical Parade” in a way—that cool feeling of awe you get seeing sparkling lights illuminate Disneyland at night, when it’s just “too late” to be up playing! This parade has an understandably modern twist, with hip music from Owl City blending nicely with midi-esque throwback MSEP melodies and lots and lots (1.5 million light sources) of BRIGHT LIGHTS. This ain’t your Grandma’s night parade. PTN includes so many favorite characters, from Tink and Peter Pan to Woody and Buzz to (sigh) Anna and Elsa, it really is a wonderful, entertaining, memorable crowd-pleaser. 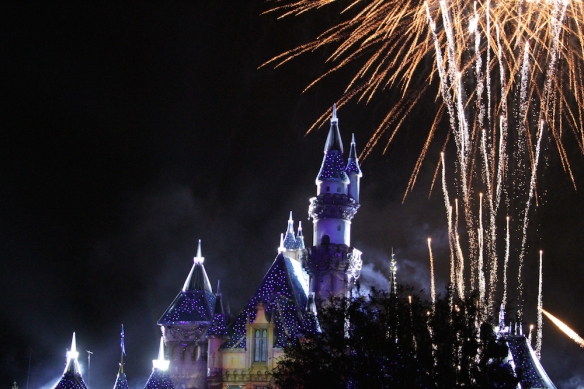 “Disneyland Forever” is also astounding, with so much effort so apparent to make this show more enjoyable from more spots in the park besides right in front of the castle. I watched from Main Street and I was absolutely bowled over by the lighting effects projected onto the buildings. One spoiler: the Winnie the Pooh sequence is EPIC from Main Street. The show is full of heart and nostalgia for the opening of Disneyland, with a beautiful homage to the orange groves of Anaheim that once upon a time made up what we now call the Magic Kingdom.

If I have any reservation about the fireworks show, it’s just in comparison to the last anniversary show Disneyland put together, “Remember.” What I liked a bit more about that show compared to “Disneyland Forever” was simply that the show focused more on Disneyland itself, as opposed to Disney films. DO NOT get me wrong—I LOVE Disney films. I just sort of expected more of a DisneyLAND love affair within the fireworks show, as opposed to an (albeit spellbinding) musical review. The plain fact is it is a fantastic piece of entertainment, as it “Paint the Night” and I’m sure the new “World of Color” is equally “dazzling.”

To all who come to this happy place, welcome! Once again, I am excited to welcome guests to come check out our fantastic, world-class entertainment offerings and I hope all of you get a chance to come celebrate 60 years of Disneyland history, while watching these two new fantastic shows.