Anyone who read my review of Pixar’s Inside Out knows that it would take a supremely amazing film to compete with what I consider one of the all-time great animated films. I did not expect a film like IO going into Minions, though. I like quirky comedies; I enjoy the occasional wacky prequel. However, by its stark contrast with Pixar’s latest and greatest, Minions can’t escape a comparison. Where Inside Out is subtle, thoughtful, and fresh, Minions is loud, mindless, and generally stinky.

There is something somewhat appealing about the little yellow sidekicks that follow Gru around in the Despicable Me series, and I’m not surprised a feature was made. The problem is that the plot doesn’t aid the franchise in any way, especially because it shows the minions constantly, instinctively searching for the greatest villain to serve, yet Gru transforms at the end of the first film, and the minions stay with him anyway. Gru’s growth gives DM heart because he is not really a “bad guy” (when I say those words, I can’t not think of Wreck it Ralph.) In Minions, villains remain villains throughout, without any character arcs or transformations.

The film is loud: so much going on all the time, from chase scenes to musical numbers, Minions is exhausting, especially considering the lack of payoff. The film is mindless: it almost seems like the writers were playing a game of mad-libs as they wrote the script. The lack of coherence, even at critical plot points, is staggering. Bob pulled the Arthurian Sword from the stone? Really? And that development is not explored more deeply at all? The film is stinky: I mean that in many ways. I can’t stand LCD fart jokes, but there were dozens of them along with repetitive other toilet-centric comedy.

The film is a failure for many reasons, but it is already a box-office success, so it’s resonating with many, regardless. I just prefer much less pandering for my money; the hundreds of thousands of shrieking children in the theater with me seemed to enjoy a lot of it. 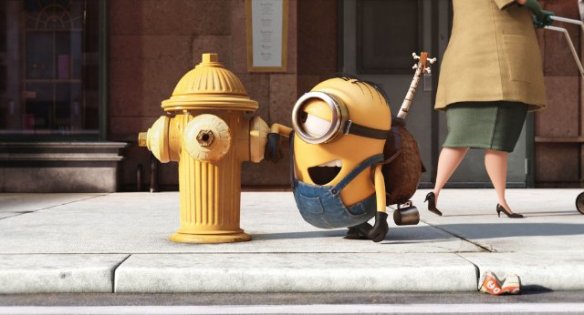