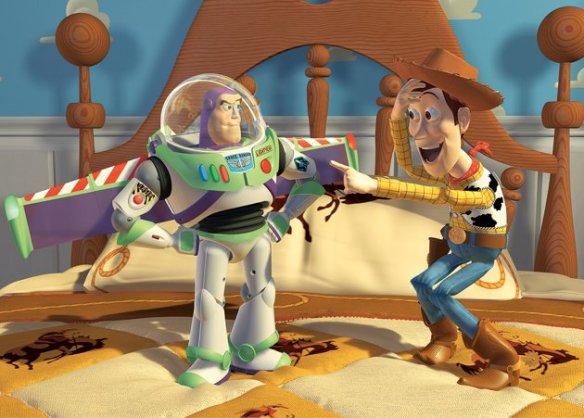 Pixar co-founder and president Ed Catmull said in his fascinating book Creativity, Inc. (which is truly a must-read for any Pixar fan):

The making of Toy Story—the first feature film to be animated entirely on a computer—had required every ounce of our tenacity, artistry, technical wizardry, and endurance. The hundred or so men and women who produced it had weathered countless ups and downs as well as the ever-present, hair-raising knowledge that our survival depended on this 80-minute experiment. For five straight years, we’d fought to do Toy Story our way. We’d resisted the advice of Disney executives who believed that since they’d had such success with musicals, we too should fill our movie with songs. We’d rebooted the story completely, more than once, to make sure it rang true. We’d worked nights, weekends, and holidays—mostly without complaint. Despite being novice filmmakers at a fledgling studio in dire financial straits, we had put our faith in a simple idea: If we made something that we wanted to see, others would want to see it, too.

I definitely wanted to see it. I was somewhat familiar with Pixar’s work at the time. I’d seen the short films Luxo Jr. and Knick Knack. And I had seen the Pixar name in the credits of Disney Animation’s 1992 hit animated motion picture Beauty and the Beast (Pixar worked their artistic and technical magic on the gorgeous ballroom scene when Mrs. Potts/Angela Lansbury sings the title song). I was dazzled by the technique and look of their computer animation, but nothing could have prepared me for seeing Toy Story in the theater. 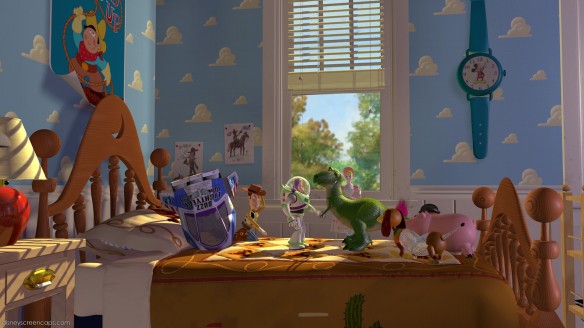 What I remember is that the amazement and novelty of the computer animation wore off quickly, but not in a bad way. The animation, as wondrous as it was and still is, became secondary to the incredibly entertaining story. The humor was so clever. The emotion was so genuine. I knew I had seen the future—the crossroads of art and technology, thoughtfully and painstakingly merged together in a magnificent new way. 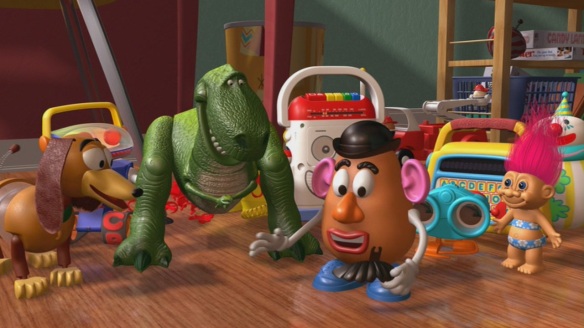 And while Toy Story has since become the juggernaut that it is today and while most everyone is using computer animation for most forms of animation, Dr. Catmull’s words continue to resonate:

Toy Story went on to become the top-grossing film of the year and would earn $358 million worldwide. But it wasn’t just the numbers that made us proud; money, after all, is just one measure of a thriving company and usually not the most meaningful one. No, what I found gratifying was what we’d created. Review after review focused on the film’s moving plot line and its rich, three-dimensional characters—only briefly mentioning, almost as an aside, that it had been made on a computer. While there was much innovation that enabled our work, we had not let the technology overwhelm our real purpose: making a great film.

Congratulations to Dr. Catmull, John Lasseter, and all of Pixar Animation Studios on the 20th anniversary of this film favorite. And many thanks for bringing out the Andy in all of us.

P.S. Make sure to check out the new special Toy Story at 20: To Infinity and Beyond on ABC on Thursday, December 10th (check your local listings). And ABC is screening Toy Story on Thursday night after the special, too. ABC and Pixar FTW!