Beauty and the Beast, one of the all time greats from Disney Animation, is getting ready to celebrate the 25th anniversary of its initial release. Can you believe it’s been 25 years? D23, Disney’s official fan club, is going to celebrate this milestone in some cool ways, too.

First, the landmark film is the cover story for the upcoming issue of D23’s premiere publication Disney twenty-three. According to the press materials from D23, the magazine is providing fans a behind-the-scenes look at the film with interviews with the voice cast, including Paige O’Hara (Belle), Robby Benson (Beast), Angela Lansbury (Mrs. Potts), David Ogden Stiers (Cogsworth), and Richard White (Gaston), along with music composer Alan Menken, screenwriter Linda Woolverton, and producer Don Hahn. Plus, they will be offering a sneak peak at the new live-action film version coming to theaters in 2017. 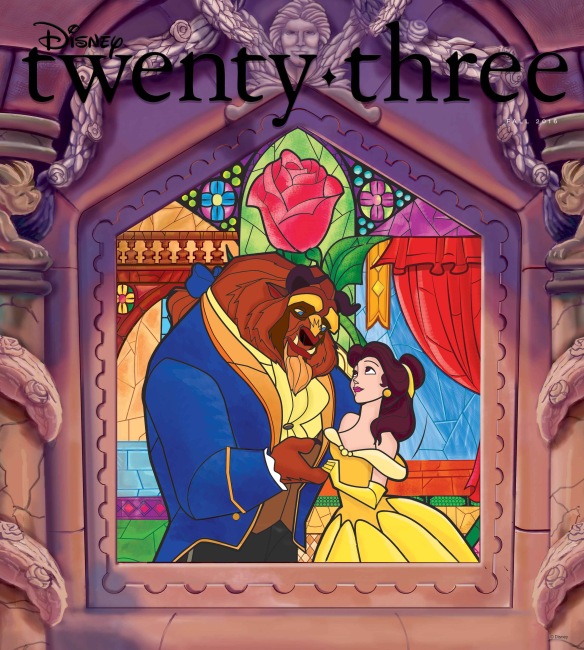 Next, D23 Members and all other Disney fans are invited to join the festivities as D23 kicks off its annual “Fanniversary” series of events. D23 will be holding member screenings of the groundbreaking film around the country, Gold Members will receive special “selfie kits” (but hopefully without selfie sticks) in Disney twenty-three magazine, and D23.com will offer fans exclusive features, videos, printables, recipes, and lots of other Beauty and the Beast-related stuff. Fans are invited to “be our guest” for this 25-day event, and to use the hashtag #D23Fanniversary on social media to join in on all of the fun. All of the info will be available soon at D23.com/D23Fanniversary.

I’m a D23 Gold Member and other than the fact that they screw up my magazine subscription every quarter (it never arrives; I always have to contact their Guest Services team and they mail a copy to me a month later…), the D23 team can put on some very fun and classy events. And I’m really glad that they are giving some love to one of my favorite films from the legendary Disney canon.

Learn more about D23 membership at D23.com. And stay tuned to Animation Fascination for more coverage of the Beauty and the Beast 25th anniversary release coming to Digital HD on September 5th and Blu-ray on September 20th.