Walt Disney Animation Studios recently shared with USA Today and with their Facebook fans new character art and details of the cast of their upcoming animated musical Moana. Come along with us to the mythic Pacific and meet the characters and voice cast of the Mouse House’s latest animated feature (all images copyright of Disney).

First up is our story’s heroine (and namesake), Moana, voiced by Oahu native Auli’i Cravalho. Moana is “a teenager who dreams of becoming a master wayfinder.” (Looks like she’s got some serious skills with that paddle, too.)

Next, of course, is demi-god Maui, voiced by Dwayne “The Rock” Johnson. Maui featured prominently in the Moana teaser trailer and I’m sure will feature prominently in the film, too (make sure to check out Dwayne Johnson’s Instagram feed for a funny–and not so family friendly–look behind the scenes of doing the voice-over work at Walt Disney Animation Studios). Maui is “half god, half mortal,” and “all awesome.”

And for now for something totally different for a Disney Animation feature, both of Moana’s parents are alive and in the movie (at least we hope they’re alive). Moana’s dad is named Chief Tui and is voiced by the great Kiwi actor Temuera Morrison. Chief Tui “is the gregarious and well-respected leader of the people of Motunui Island.” Moana’s mom is named Sina and is voiced by actress, singer, and television personality Nicole Scherzinger. Sina is “playful, sharp, and strong-willed,” and she definitely “appreciates Moana’s longing to be on the water, but also wants to protect her daughter from the fabled dangers beyond the reef.”

And to keep the family love going, Moana has a living grandmother. Gramma Tala, voiced by New Zealand actress Rachel House, is “Moana’s confidante and best friend” and she “share’s her granddaughter’s special connection to the ocean.”

Now for the Disney animal sidekicks! Yes! Moana has a loyal pet pig named Pua. There is also a “dumb rooster” in the movie (Disney said it, not me) named Heihei who stows away on Moana’s canoe. I’m excited to see Heihei in action because he voiced by none other than the awesome Alan Tudyk, who is the de facto good luck charm for today’s Walt Disney Animation Studios.

It’s time for some bad guys, right? Here are the Kakamora, who are an “intense team of crazy, coconut-armored pirates who will stop at nothing to get what they want.” (I’m just the reporter.)

And finally there is Tamatoa, a “self-absorbed, 50-foot crab who lives in Lalotai, the realm of monsters.” Tamatoa is voiced by yet another New Zealand actor and one that we love: the incomparable Jemaine Clement. (Let’s hope Lin-Manuel Miranda wrote him a song!)

There you have it. With its strong vocal cast, beautiful character designs, promising storyline, and A-list animation, writing, and musical talent, we are really excited to see this film. Moana opens in U.S. theaters on November 23rd. 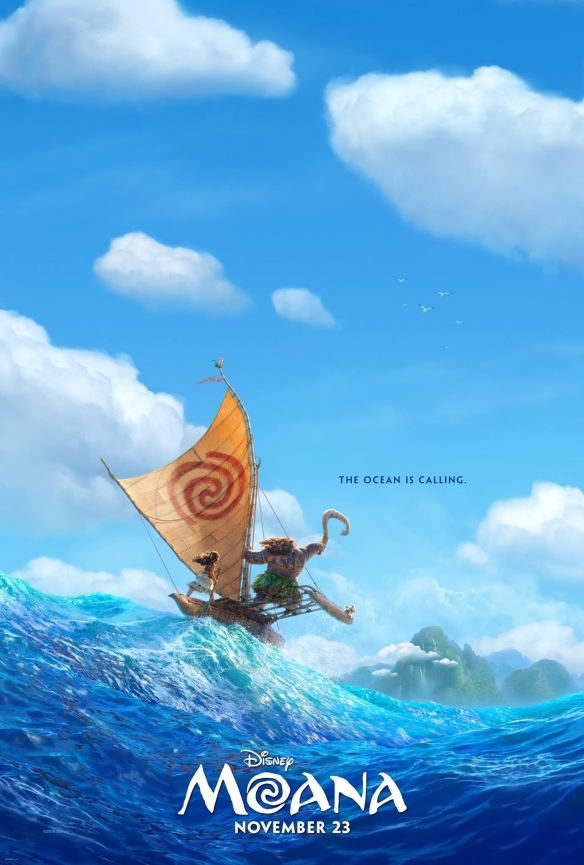