Pixar Animation Studios made a big voice cast and partnership announcement on Thursday for their upcoming animated feature Cars 3. The press event took place at the Daytona International Speedway in Daytona, Florida, which is getting ready to host the 2017 NASCAR DAYTONA 500–the “Great American Race”– this weekend.

Brian Fee, the director of Cars 3, along with actress and comedian Cristela Alonzo, the voice of Cruz Ramirez in the film, were on hand to announce that some NASCAR racers were going to voice new characters in the upcoming sequel and that some racing favorites from the previous Cars films would be returning as well. 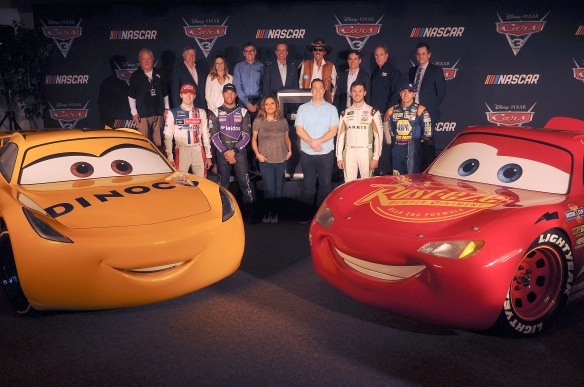 Here’s the rundown on the NASCAR Cars 3 voices and characters from today’s announcement:

· RYAN BLANEY, a 23-year-old, third-generation racer, pilots the No. 21 Ford in the Monster Energy NASCAR Cup series. He voices third-generation racer RYAN “INSIDE” LANEY in Cars 3. Known for his racing passion and ability to have fun on the track, Laney races with talent, speed and precision.

· DANIEL SUÁREZ, who just turned 25, pilots the No. 19 ARRIS Toyota Camry in the Monster Energy NASCAR Cup Series. The 2016 NASCAR XFINITY Series champion can be heard in the film voicing DANNY SWERVEZ, a next-gen racer who’s ascending the Piston-Cup ladder against all odds. A mid-season replacement, Swervez is a quick learner who pushes himself to the limit.

· BUBBA WALLACE, 23, won the NASCAR Camping World Truck Series race at Martinsville Speedway in 2013, becoming the first African American to win in one of the top three touring divisions since Wendell Scott in 1963. In Cars 3, Wallace voices next-gen stock car racer BUBBA WHEELHOUSE, a fast and tenacious young racer who knows how to win.

· DARRELL WALTRIP, the NASCAR Hall of Fame racer-turned-NASCAR on FOX color analyst lends his voice to DARRELL CARTRIP. Cartrip, a veteran Piston-Cup announcer also heard in Cars and Cars 2, may think he’s seen it all—but this new season might still have a surprise or two in store.

· SHANNON SPAKE, NASCAR on FOX correspondent and college football and basketball reporter for FOX Sports, voices on-the-track reporter SHANNON SPOKES in the film. Spokes weaves her way into the middle of the action for in-the-moment interviews, and she’s not afraid to ask racers the tough questions.

· HOWARD AUGUSTINE “HUMPY” WHEELER JR., the legendary NASCAR promoter and former president and GM of Charlotte Motor Speedway, lends his voice to iconic Dinoco team owner TEX DINOCO in Cars 3. Tex, who met Lightning McQueen in Cars, would love nothing more than to see #95 decked out in Dinoco blue.

· JEFF GORDON, four-time NASCAR champion, current NASCAR on FOX analyst, and story consultant for Cars 3, lends his voice to JEFF GORVETTE. Gorvette, whose number of top-ten finishes remains unmatched, may have hung up his racing tires—but his heart remains on the track. His ability to succeed at all levels turned hoods wherever he raced.

· RICHARD “THE KING” PETTY, team owner and champion NASCAR driver with 200 wins, returns to the role of STRIP “THE KING” WEATHERS. From his humble beginnings on the Piston-Cup circuit to the glitzy sponsorship and media attention, the champion racer now serves as crew chief for his nephew, Cal Weathers.

· KYLE PETTY, retired NASCAR driver and current NASCAR commentator on NBC, helps bring CAL WEATHERS to life in Cars 3. Weathers grew up around the track watching his uncle, Strip “The King” Weathers, tear it up. The veteran racer finds himself taking a step back to make room for the next generation on the track.

· MIKE JOY is FOX Sports’ lead NASCAR announcer who will call his 38th DAYTONA 500 this Sunday. He lends his iconic voice to on-the-spot radio talk show host MIKE JOYRIDE in the movie. Joyride stays one step ahead in the racing news game by keeping a keen eye on where the racing season is headed.

· RAY EVERNHAM, winner of three NASCAR championships as crew chief for Jeff Gordon and current consultant to Hendrick Motorsports, lends his voice to RAY REVERHAM, Jackson Storm’s crew chief, and an expert at training in the cutting edge technology and tactics being used by the next-gen racers. Evernham also serves as a story consultant for filmmakers.

Also making her official debut today is the life-size version of Cruz Ramirez (with some rad Dinoco labels!). 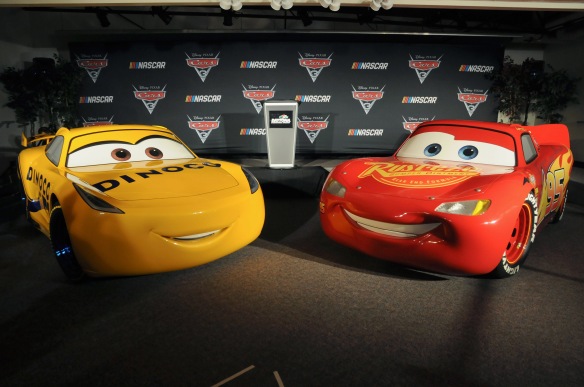 Pixar also announced a promotional Cars 3 partnership with NASCAR, which will include a Cars 3 track presence and promotions at all 2017 Monster Energy NASCAR Cup Series races, a co-branded merchandise program with Fanatics (Cars 3 items will be avilable for purchase at Fanatics Trackside Superstores and online at the NASCAR.com Superstore), and a cool youth sports and educational program called NASCAR Acceleration Nation.

And don’t forget, Owen Wilson is the Grand Marshall for the DAYTONA 500 race, so chances are excellent there will be some more Cars 3 goodness coming this weekend (the race will be broadcast this Sunday, February 26th, on FOX; check your local listings).