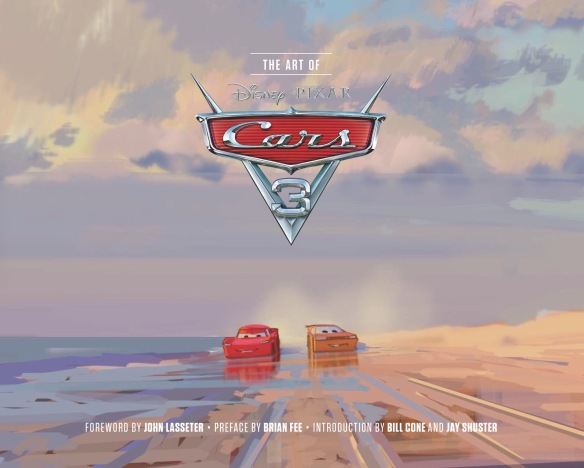 The Art of Cars 3, Chronicle Books‘ new collaboration with Pixar Animation Studios, is a beautiful and insightful look into the creation of Pixar’s new animated sequel.

I am a big fan of the animation art books that Pixar Animation Studios and now Walt Disney Animation Studios have been creating with Chronicle Books over the years. The Art of Cars 3 follows in this successful formula with some cool add-ins.

The book starts off with a traditional preface by Pixar and Disney Animation chief John Lasseter and by Cars 3 director Brian Fee. Then, a fascinating introduction section by Cars 3 production designers Bill Cone and Jay Shuster really set the tone for the book and for the movie–Cars 3 is a well-researched and legitimate return to a story set within the world of American automotive racing, specifically NASCAR.

As detailed in the book, the artists did their homework. They traveled throughout the southern U.S. talking with current and former NASCAR drivers as they visited race tracks in North Carolina, Georgia, and Florida–the locations where NASCAR was born.

The art in the book is, no surprise, gorgeous and informative. The concept art, storyboards, pastels, and digital paintings included show the love and care that the Pixar artists put into all aspects of their work. I also enjoyed the photography included with pictures taken during the team’s research trips. Captions written by Bill Cone, Jay Schuster, and others throughout the book provide wonderful background information for many of the images.

Also being a fan of automobiles in general, I particularly enjoyed seeing the design evolution of the Cars 3 characters. Not only is it an animation book, it’s like looking at a great automotive design book, too.

The Art of Cars 3 provides another great view into the movie magic created at Pixar Animation Studios. Veteran Pixar production designer Jay Schuster says it best in his introduction in the book:

Like the reliable family hauler you trust will get you across town every time, the movies we work on can experience surprises and breakdowns. But like my dad who’s kept a variety of Chevrolet Corvairs running like new for decades, people persist when they have passion for their craft; their love for creating keeps the throttle down and the rubber on the road. It is with this same passion that we present the Art of Cars 3: Consider it an owner’s manual for your newest joyride.

The Art of Cars 3 is available now at fine booksellers everywhere. Cars 3 opens in U.S. theaters on June 16th.