Thirteen years ago today, (ooh, spooky!) Pixar released their fourth full-length animated feature: Monster’s Inc. Directed by Pete Docter, with a screenplay from the likes of Andrew Stanton, this film was destined for success. Monsters Inc. follows the lives of James P. Sullivan (Sulley) and Mike Wazowski as they work on the scare floor of the biggest company in Monstropolis, Monster’s Incorporated. This film may get blown past by some as one of many “good” films Pixar did in the early 2000’s, but Monster’s Inc. deserves to be hailed as one of the great animated films in history because it truly is.

END_OF_DOCUMENT_TOKEN_TO_BE_REPLACED 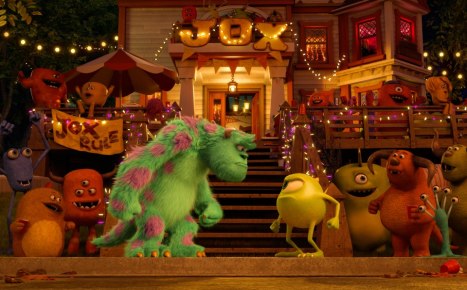 June 21st is fast approaching and with that an avalanche of Monsters University awesomeness is headed our way. Within that avalanche we’ll find beautiful new concept art, amazing merchandise, news, clips, and much more for Pixar’s 14th feature film. From that first wave Disney/Pixar has released the new still (above) and some beautiful new concept art from the film as well. Check it out…

END_OF_DOCUMENT_TOKEN_TO_BE_REPLACED

Yesterday two new viral ads were added to the official Monsters University YouTube channel. Both show some new footage that we have yet to see, mixed in with footage we’ve seen previously. Check them out after the jump!

END_OF_DOCUMENT_TOKEN_TO_BE_REPLACED

Recently two foreign marketing promotions have made their way online for Pixar’s upcoming fourteenth feature film Monsters University. The first is a poster found on the Argentinean site Cine1. The new poster contains some existing artwork and character poses that we’ve seen in the past, though not in this particular configuration. It also appears that this was a triptych poster available in three separate pieces, but the Pixar Brasil Blog has brought them together for your enjoyment. Check out the full poster and Japanese trailer after the jump…

END_OF_DOCUMENT_TOKEN_TO_BE_REPLACED

We here at Animation Fascination are pretty excited for Pixar’s 14th feature film, (and the prequel to Monsters, Inc) Monsters University. At this point we still haven’t seen much from the film  besides the first teaser trailer attached to Brave last summer and the viral college ad. But that’s about to change on February 19th. END_OF_DOCUMENT_TOKEN_TO_BE_REPLACED