Pixar Animation Studios released a new poster and a new clip from their upcoming short film Party Central. The new clip picks up where the previously released clip left off as Mike and Sulley begin to execute their plan to make the greatest campus party of the year happen at the Oozma Kappa house. 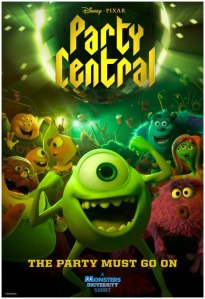