Walt Disney Animation Studios’ new short film Feast made its debut this week at the 2014 Annecy International Animation Film Festival. The six-minute short tells the story of “one man’s love life as seen through the eyes of his best friend and dog, Winston [a Boston Terrier], and revealed bite by bite through the meals they share.”

Feast is directed by Patrick Osborne, who is currently the co-head of animation on Disney’s upcoming Big Hero 6, and produced by Kristina Reed, who also produced Disney’s Oscar award-winning short Paperman.

Variety wrote a glowing review of the short:

“The title may refer to the fact that each shot centers around food, but this exquisite short is a feast for the eyes and imagination as well, just one more way in which Disney is proving to the world that its animation department — which spent the past 20 years in Pixar’s shadow — is as vital and creative as ever.”

Cartoon Brew also raved about the short in this tweet:

Some new promotional art debuted at the festival as well: 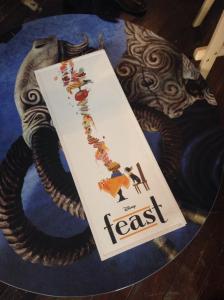 Feast is expected to make the rounds at different film festivals this summer and will play in front of Disney’s Big Hero 6 which opens in U.S. theaters in 3D on November 7th.