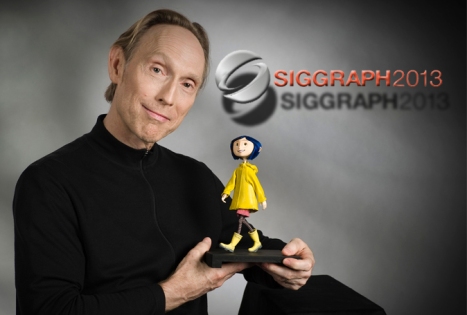 SIGGRAPH 2013 is well underway in Anaheim, CA, and Monday, the Academy of Motion Picture Arts and Sciences presented a keynote panel, which included many of feature animations best and brightest.

The panel was made up of DreamWorks Animation’s Chris Sanders (The Croods), Kevin Lima (Monkeys of Mumbai), Mike Mitchell (The Trolls), Pixar’s Pete Docter (Up), Disney’s Ron Clements and Kirk Wise (Aladdin and Beauty and the Beast, respectively), The Simpsons‘ David Silverman, and Henry Selick, the director of The Nightmare Before Christmas, James and the Giant Peach, and Coraline.

The goal of the panel was to discuss the ever shifting industry and the fundamentals of 2D animation in a world where the 3D animated feature is king.

Selick even touched upon the struggles of animators working in this new world order of the tent-pole animated blockbuster. According to the Hollywood Reporter, Selick lamented that Studios are making it more difficult for artists to take creative risks.

“Having to make a blockbuster every time puts unhealthy pressure on creatives,” Selick said. “The pressure on the filmmakers is so intense I think it stifles the creativity.”

With mega hits (and sequels) Monsters University and Despicable Me 2 doing excellent business, while new IPs Turbo and Epic both stumbled, fans should only have to look at the box office receipts to see that Selick might be on to something.

“I can’t imagine another ‘Fantasia’ being made today,” he said. “I’m hopeful there will be a breakthrough and one big studio will force us (animators and filmmakers) to try something new.”

Selick also went on to urge animators and filmmakers to explore and utilize other platforms such as YouTube and Netflix to help distribute their work. Collectively, the keynote panel promoted and encouraged animators to continue to expand their creative voices by reading, listening to music and traveling.

SIGGRAPH, which began in 1974, is an industry-wide conference that focuses on Special Interest Groups on Graphics and Interactive Technologies. It kicked off on July 21st and goes through July 25th.

1 thought on “Selick Admits to Industry Challenges at SIGGRAPH”